We were up and packed early to hit the trail, but our plans for an early departure were waylaid by a slow breakfast at the restaurant across from the hotel. Three of us got our food, but Mama Bear’s omelet was inadvertently delivered to a different table, so we had to wait for them to cook another. But that just meant more time for eggs, pancakes and coffee for the rest of us.

We walked for a couple miles through town and over some long bridges across the Susquehanna, then ascended the steep ridge. Halfway up, we were surprised with a greeting from Malto, the fast-packer who had hosted us three nights earlier. He explained that he’d never had a chance to show the kids what he kept in his hip belt pockets. He then proceeded to open them and show the sundry items that he carried, including a small pocket knife that is just like Cartwheel’s (but not as pink). As he held the knife out for her examination, she noticed a small ring dangling from the key loop on the end of the knife. Her face lit up as she realized it was the ring that she had accidentally left in the bathroom at his house when she took her bubble bath (the same ring Wired found in a log).

It was incredibly nice for Malto to drive all the way out to return the ring, and we enjoyed hiking with him a few miles back to his car. Malto uses the smaller cousin of the Mountain Laurel Designs pack that RobinHood uses, and on his large frame it looks even tinier. He posed with RobinHood for some pictures.

After we left Malto, we were caught from behind by Iron Chef, Rocky, Sparky, and Ferris. The kids loved a new audience for all their stories and matched the brisk pace of that crew. The miles were flat and easy walking, and they seemed to melt away. At lunch RobinHood enjoyed making sculptured with his socks, which were once again dirty enough to stand on their own (they do actually get washed regularly).

We were all shooting for the same campsite, but when we arrived to discover it was waterless, we all decided to push on another couple of miles to the next one (the rocky ridges in PA really limit the availability of soft sleeping spots).

We had a fun evening with lots of laughter and even some fireworks at the end. Cartwheel enjoyed goofing around in Iron Chef’s size 14 camp shoes.

There were a few less than jovial moments, however. Cartwheel, while attempting to climb into her hammock while acting silly for her viewing audience, managed to flip out of it and land on the ground, shielded by a log from Mama Bear’s view. When Cartwheel didn’t respond to repeated queries as to whether she was alright, Mama Bear ran over to check (while wearing only one shoe, since she was removing the tape from her previously sprained ankle) and promptly stubbed her bare toe. They were both hurt, but not gravely, and they comforted each other.

Later in the night, after a long effort building a fire with wet wood to roast s’mores, RobinHood inadvertently lit his marshmallow aflame, and in his hasty effort to blow it out, stuck some sugary napalm to his cheek, leaving a small burn.

But despite those short tearful moments, eventually the laughter more than drowned out the tears, and a good night was had by all. 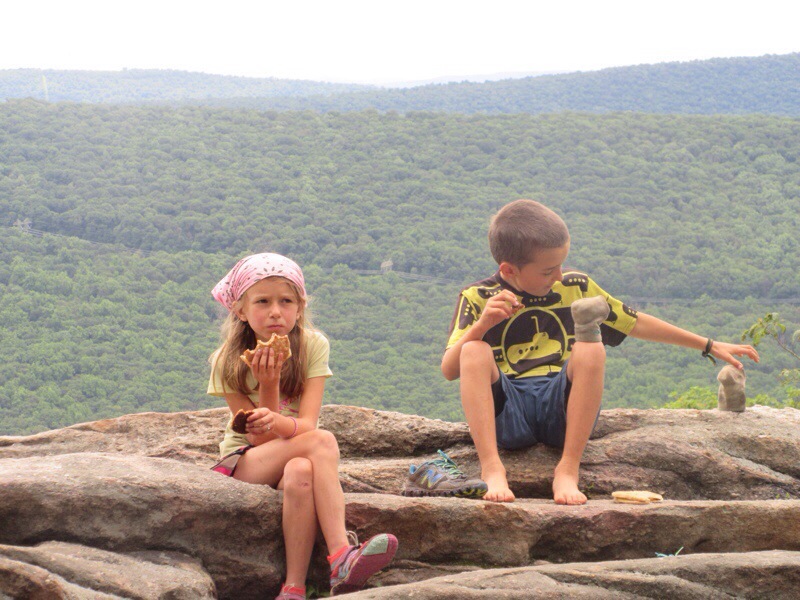