Because we had been counting on the closed hostel for some needed resupply, we decided that dad would speed ahead eight miles to walk to the Bear Mountain Lodge camp store a half mile off the trail. Of course, as soon as it was decided by the parents that dad would hike faster than the kids, it was decided by the kids that they would keep up. And keep up they did, pausing only to pick some chives by a dilapidated barn. As soon as it was discovered we were low on food, RobinHood declared that he would catch a fish and forage a salad for supper.

It turns out that small bodies can run full speed down hills with their packs on (their young knees are much more able to absorb the Newtons generated by their small masses accelerating along the declines), while we adults can’t (our aging bodies are much more inclined to absorb the Newtons generated by Nabisco). And it was good that they did. The whole family walked the half mile to the camp store. The kids made friends with the kids of the owners of the resort, folded paper airplanes and went swimming in their kiddie pool. Meanwhile, the adults had pizza and beer for lunch, shopped for the next few days into Virginia, and took showers.

Back on the trail, we were treated to yet more spectacular waterfalls. RobinHood pulled out his fly rod at every opportunity, and his persistence paid off. All day he had been explaining that we were arriving at perfect fishing spots, only at the wrong time of day (fish don’t like to eat in the hot sun of midday). At Watuga Lake, we caught up to a passel of hiking buddies who had gotten ahead of us but taken a day off. While Cartwheel socialized, danced to the music they were playing and turned countless cartwheels on the beach, RobinHood got down to business: fishing. He landed three different sized sunfish, much to the delight and amusement of the onlookers. His belly still full from the lunch, he decided on catch-and-release (and let-mom-cook-dinner). We spent some time at the shelter socializing in the evening, then headed on another half mile to camp on our own. 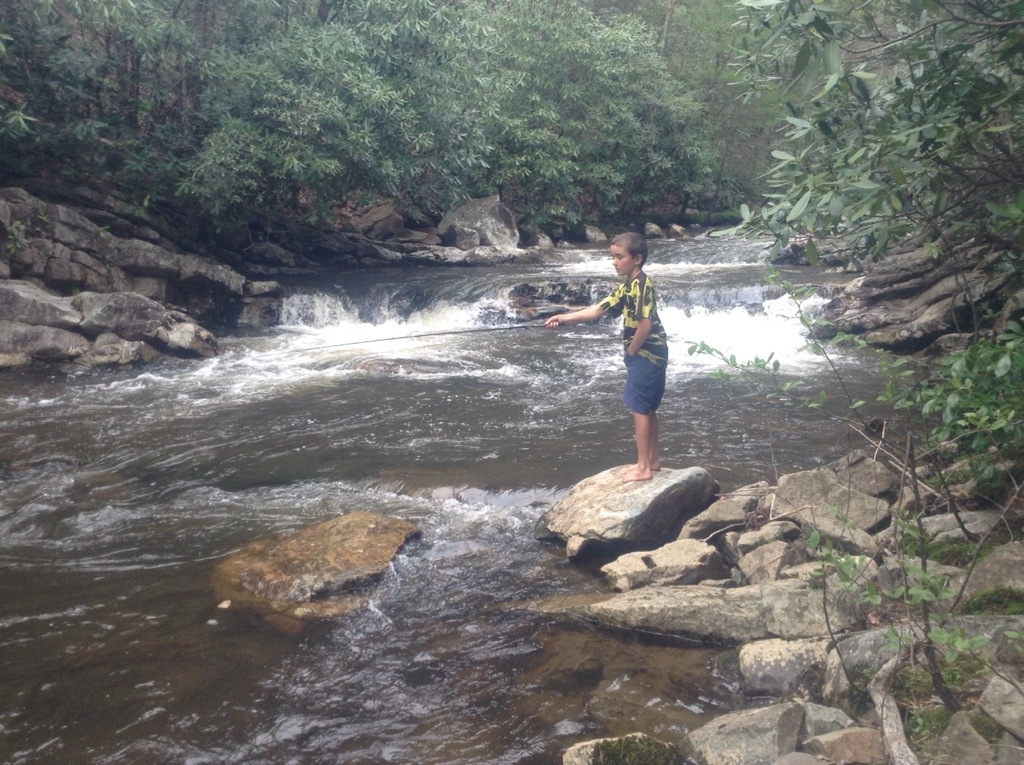 ← April 29 – water, water everywhere
May Day, the road to Damascus →